Focus Canada: Canadian Public Opinion About Immigration and the USA

As part of its Focus Canada public opinion research program (launched in 1976), the Environics Institute updated its research on Canadian attitudes about immigration and about the USA. This survey is based on telephone interviews conducted with 2,002 Canadians between April 3 and 15, 2017. A sample of this size drawn from the population produces results accurate to within plus or minus 2.2 percentage points in 19 out of 20 samples.

In the past six months, the surprising election of Donald Trump to the US presidency has sent shock waves through that country, and reverberations around to globe. His administration is charting an unpredictable new course in domestic and foreign policy, and among the first steps has been a tightening of restrictions for visitors, immigrants and refugees seeking to enter the USA. Many parts of Europe are also experiencing the emergence of anti-government sentiments, nationalism and populism, with much of the anger focused on refugees and immigrants.

Here in Canada, the Trudeau government is holding firm on its policies on diversity and inclusion, and the country has welcomed 35,000 Syrian refugees with little controversy. But a number of communities are experiencing disturbing racist or anti-Muslim incidents, and some commentators are concluding that Canadians are following the US lead in becoming less tolerant of immigrants and people who are different. To test this contention, the Environics Institute conducted a new survey to identify if and how Canadian public opinion about immigration has changed over the past six months, as well as how Canadians now view the USA in light of its new President. 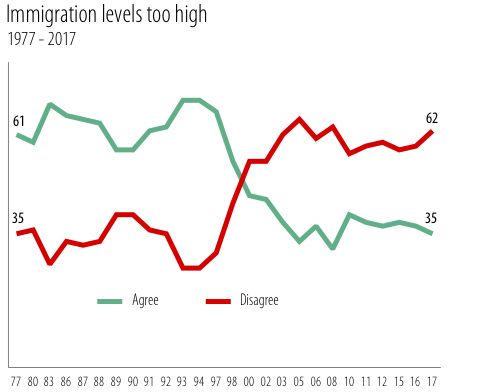 The results are conclusive. Canadians’ opinions about immigration remain as positive, if not more so, than last measured in October 2016. Most continue to disagree that the country is taking in too many immigrants, and there remains a broad consensus that immigration benefits the economy. Skepticism about the legitimacy of refugee claimants is diminishing, and concern about too many immigrants not adopting Canadian values – while still the majority view – remains at record low levels.

As before, opinions vary somewhat across the country. Positive views about immigration and refugees are more evident among younger Canadians, and those with higher levels of education and income; those 60 years and older are among the most negative. Alberta stands out as the one part of the country where attitudes about immigration have become more negative since last October. 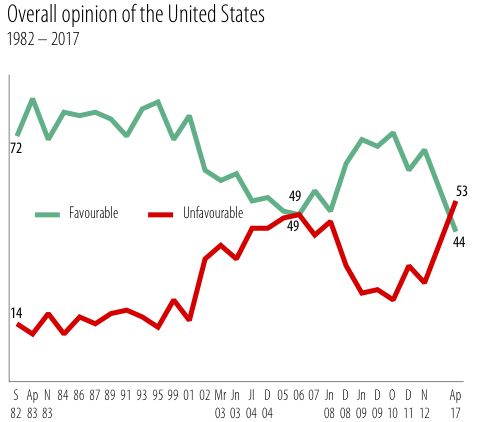 While public opinion about immigration has remained notably stable over time, views of the USA have changed dramatically as a result of the Trump presidency. Fewer than half of Canadians now hold a favourable view of the USA, down significantly from 2012 and now at the lowest level recorded on Focus Canada since this was first measured in 1982. The impact of the new US political reality goes beyond impressions, with one in four Canadians reporting to have either changed, or thinking about changing, plans for visiting the US this year because of the current political climate.

Finally, do Canadians anticipate that the anti-government populism sweeping other western nations will happen in their own country?  Opinion is divided with few feeling certain about the future.