A major survey was conducted in 2018 by the Environics Institute for Survey Research, in partnership with the University of Toronto and York University. The survey is the first of its kind in Canada to explore the perspectives of Jews in Canada, addressing themes of identity, practice and experience. 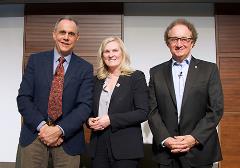 The survey focuses on what it means to be Jewish in Canada today - specifically, patterns of Jewish practice, upbringing and intermarriage, perceptions and experiences of anti-Semitism, connections to Israel, and personal and organizational connections. The survey is modelled closely on the 2013 Pew Research Center Survey of American Jews, to provide the basis for cross-national comparison.

The survey was conducted by telephone and online between February and September 2018 with a representative sample of 2,335 Canadians (18 plus) who identify as Jewish or part-Jewish. The survey was conducted in the metropolitan areas of Toronto, Montreal, Winnipeg and Vancouver, which together encompass more than 80 percent of the country's Jewish population.

Read about the survey in the Canadian Jewish News

Read about the survey in The Times of Israel

The Environics Institute is partnering with Dr. Robert Brym (SD Clark Chair of Sociology at the University of Toronto) and Dr. Rhonda Lenton (President and Vice-Chancellor, York University) to conduct a landmark national survey of Jews in Canada in 2018. The purpose of this research is to provide the first-ever national scale study to provide a substantive understanding about Jewish identity, priorities, attitudes and values. In 2013, the Pew Research Center completed a comprehensive survey of American Jews that addressed many of these questions for the American community. This research provides a valuable portrait of the Jewish population in the USA, and raises important questions about the extent to which its findings may or may not characterize the Canadian Jewish community.

Canada’s Jewish population has historic roots stretching back to the times of earliest European settlement of this continent, and today it is diverse and consists of numerous distinct religious and cultural communities, and is evolving along with the rest of society. Within the next few years, Canada’s Jewish population is expected to exceed 400,000, which would make it the largest Jewish community outside of Israel and the United States.

The survey covered the Jewish population in the Toronto, Montreal, Winnipeg and Vancovuer metropolitan areas (comprising well over 80 percent of the country's Jewish population). The survey was funded by the study partners, with additional support provided by the following organizations: