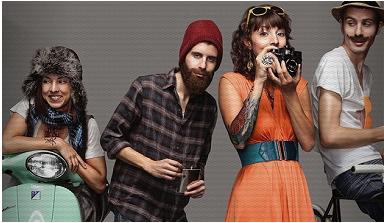 A major national survey conducted in 2016 reveals a bold portrait of Canada’s Millennials (those born between 1980 and 1995), that for the first time presents the social values of this generation, and the distinct segments that help make sense of the different and often contradictory stereotypes that so frequently are applied to today’s young adults.

The results show that Millennials cannot be lumped into a single group defined by their age, or by other demographic characteristics such as gender, region or socio-economic status. They are a diverse part of the Canadian society, made up of six social values “tribes”, each reflecting a distinct worldview and approach to life. While Millennials may share some common experiences and aspirations as befits their stage in life, there are notable differences in outlook and life path across these tribes, be they “Engaged Idealists,” “Bros and Brittanys,” or “Lone Wolves.”

The study built on the foundation of Environics’ Research leading-edge social values research to better understand how Millennials are taking their place in society through the lens of their social values, with a focus on their life goals and what it means to be an adult, career aspirations and work experience, and political and social engagement.

Key findings from the survey include the following:

The study was conducted by the Environics Institute for Survey Research, in partnership with The Counselling Foundation of Canada,Royal Bank of Canada, the J.W. McConnell Family Foundation and Apathy is Boring.

The survey is based on interviews conducted online with a representative sample of 2,072 Canadians aged 21 to 36 across the country between July 6 and August 31, 2016. The sample was stratified by age, gender and region (margin of error statistics do not apply to online surveys that employ non-probability samples).

Are you a Millennial?  Find your Tribe HERE

Background. Millennials make up almost a quarter of the Canadian population. The cohort of Canadians born between 1980 and 1995  (now aged 21 to 36) is among the largest in the country’s history, and is literally the country’s future: who they are today and what they become will shape Canada for the next half-century and beyond. Leaders must find ways to engage these young adults as citizens, consumers, employees, voters, and donors.

Much of what passes for analysis of the youngest generation of Canadian adults amounts to little more than anecdote and stereotype. Aside from data on youth unemployment and student debt, the Canadian conversation is remarkably devoid of solid evidence about how Millennials live, what they think, what they value, what they want, or what they hope to achieve. Are they motivated strivers facing a tough job market, or entitled brats who are too picky to accept an unfulfilling job?  Are they talented digital innovators or just screen addicts? Have they been nurtured by their Boomer parents’ loving encouragement, or are they entitled narcissists poisoned by a lifetime of unearned praise? Newspapers, newsfeeds, and dinner tables teem with opinions.

Perhaps the biggest limitation in this discussion is how it lumps an entire generation into a single group, the implicit assumption being that age alone is the defining characteristic. This type of shorthand misses the important insights revealed by Michael Adams a decade and a half ago in his book Sex in the Snow. In that bestselling analysis of Canadian society, Adams showed that demography is no longer destiny, and that every generation is composed of distinct subgroups or “tribes”, each defined by a unique constellation of social values by which individuals orient themselves to the world and their lives.

Over the past two decades, Environics has pioneered the application of social values theory and analysis to improve our understanding of modern society and social trends. This work has proven of practical benefit to governments, businesses, and non-profits in Canada and abroad. Environics’ ongoing research program has now been applied to understanding Canada’s Millennial generation, which is the most diverse generation in the country’s history, not only across ethnic, national and religious backgrounds, but also in terms of their values and life choices. Millennials fall into six main values segments.