Sanctuary Cities: Why it's harder for Trumpism to take root in Canadian cities

The following op-ed was published by Michael Adams and Doug Norris in the January 20, 2018 edition of The Globe and Mail.

In early 2007, former New York mayor Rudolph Giuliani led the pack of would-be Republican nominees for president – but some worried he was “too metropolitan” for heartland voters. Today another famous New Yorker, Donald Trump, marks his first year in the White House. Paradoxically, the Manhattan magnate’s supporters are overwhelmingly rural and small-town.

America’s big cities like New York and Los Angeles – and even smaller places like Miami and Dallas – loom large in imaginations far beyond America’s borders. As for Canada, we suspect most people around the world tend to imagine it as defined more by wilderness than urbanism.

Despite Canadian cities’ lower profile, however, they arguably exert more pull in the country’s political life than American cities do south of the border. American cities are culturally potent, but politically constrained.

One reason is that a greater share of Canada’s population is clustered in a smaller number of cities. America’s 10 largest cities contains only eight percent of the country’s population. The proportion of Canadians who live in Canada’s 10 largest is almost quadruple that: 31%. Canadians’ clustering in a relatively small number of places is even more evident when we include the suburbs. If we look at the Census Metropolitan Areas of the top 10 Canadian and U.S. cities, we find about a quarter of Americans (27%) and more than half of Canadians (55%) living there. 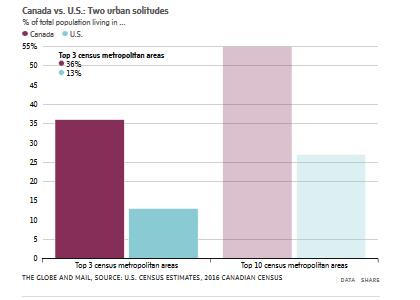 People live differently in cities; they have different experiences, different neighbours, and different economic opportunities. Cities are where most trade and formal learning happen, where complex networks and institutions are created, where many cultural opportunities tend to cluster.

But it’s not just the fact of urban living that matters; it’s also the nature of the cities. Canadian cities are some of the most diverse on earth. The populations of two of its largest, Toronto and Vancouver, are nearly half foreign-born and over two-thirds either first- or second-generation Canadian. Canada’s cities are largely products of post-WWII and subsequent immigration. The last half-century has been especially important: Canada retired its explicitly racist immigration policies in the 1960s and moved to a points system that prized education and language proficiency, leading to huge inflows of talent, energy, and youth from around the world. 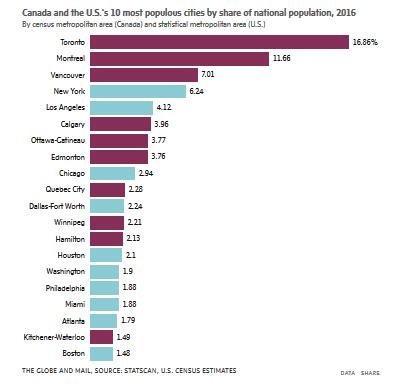 The U.S. also had considerable (but proportionally smaller) migration in-flows over the same period, which affected cities profoundly. But American cities were also being shaped by forces related to slavery and segregation. Millions of black Americans fleeing the violence and oppression of the Jim Crow South moved to northern cities like New York, Milwaukee, Detroit, and Chicago. In many urban neighbourhoods, when new black residents moved in, whites moved out to monocultural suburbs – a pattern sometimes called “white flight.” Redlining, housing discrimination, and other racist practices also contributed to the de facto segregation of ostensibly integrated cities. The effects of these policies remain in evidence today. 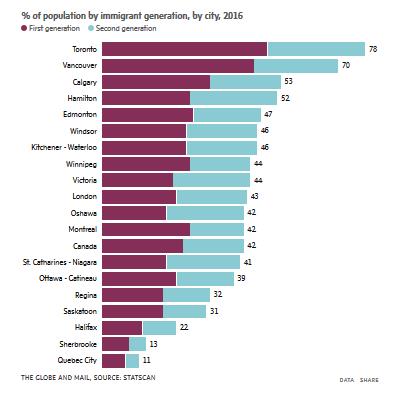 It’s true that poverty is racialized in Canada, and that this is reflected in some of the residential patterns we see in and around big cities. But Canada never had a demographic upheaval on the scale of the Great Migration in the United States, which saw the internal migration of some six million Americans. The story of ethnic concentration in Canada is a nuanced one, shaped directly by discrimination in some cases – and indirectly by economic circumstances born of discrimination – but also often driven by people’s choice to be close to others of their own background. Ethnic enclaves can support shops with offerings from “home,” as well as community and religious gathering places. The thriving Chinese community in the affluent Toronto suburb of Markham and the South Asian community in Surrey, B.C. for instance, were formed more by affinity than by discrimination (which is not to say their residents don’t experience discrimination – just that it didn’t compel them to live where they live).

Another quality that differentiates Canadian cities from American ones is that they are connected to a system – and, importantly, a culture – of economic equalization. Although provinces are responsible for health and education, the federal government redistributes resources with the aim of ensuring that all Canadians enjoy comparable levels of service. This ideology shapes the political culture of provinces and cities as well; when disparities are revealed in the levels of service available to people living in different parts of a larger jurisdiction, Canadians tend to agree at least in principle that this is unacceptable.

Americans, with their greater skepticism of government and their greater attachment to local control, are less likely to believe that all Chicagoans, for instance, should enjoy the same quality of services. The fact that excellent schools funded by a strong tax base can be just a few miles away from struggling schools with crumbling infrastructure probably doesn’t thrill most Americans – but it is part of their economic and political tradition. Politically viable responses to such inequity (school vouchers, innovative charter schools) tend to be rooted in more individual choice and more entrepreneurialism, not more redistribution and greater social solidarity across social and geographic boundaries.

The composition and characteristics of each society’s cities have important political implications. In Canada, it’s difficult to win a federal election without winning over immigrants and their children, a powerful presence in many urban and suburban ridings. In the United States, for presidential candidates, the diverse urban vote is useful but not make-or-break. Equally important, the urban vote isn’t always diverse; it can be monocultural. Redrawing electoral boundaries can allow candidates to ignore the people they’d rather ignore, and still win. North Carolina’s lawmakers have twice been ordered by judicial panels to redraw that state’s electoral map because of extreme gerrymandering – one according to voters’ partisan affiliations, another time by race.

As for the US Congress, the composition of the House of Representatives, like our House of Commons, largely reflects the distribution of the population. But the U.S. Senate -- much more powerful than our largely advisory upper chamber dedicated to sober second thought -- gives hugely disproportionate powers to rural states: Wyoming (population: 585,501) has the same number of Senators as California (population: 39.25 million). Indeed, the 26 least populous states, whose 52 Senators constitute the majority, represent less than a fifth of the country’s population. 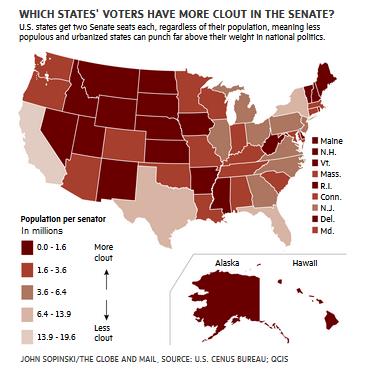 Canada has racists and racism; and like elsewhere, some of them are feeling emboldened by recent political events. But the mechanics of our political institutions are such that, at the national level, courting the dominant-culture majority at the expense of smaller ethnic or religious groups is a dangerous game, as the Harper Conservatives learned in 2015. In the United States, it can be a winner.

Many factors differentiate Canada from the United States. Our history, our institutions, our values, our public policies are all distinct. The fact that so many of us live so close together in a small number of diverse – in a few cases hyper diverse – cities is one of the key factors that makes a politically dominant Trump-style backlash on a national scale in this country unlikely.

Michael Adams is president of the Environics Institute for Survey Research and author of Could It Happen Here? Canada in the Age of Trump and Brexit, published in fall 2017 by Simon & Schuster. Dr. Doug Norris is Senior Vice President and Chief Demographer at Environics Analytics.