As the economy restarts, Canada needs to focus on those hardest hit by the pandemic 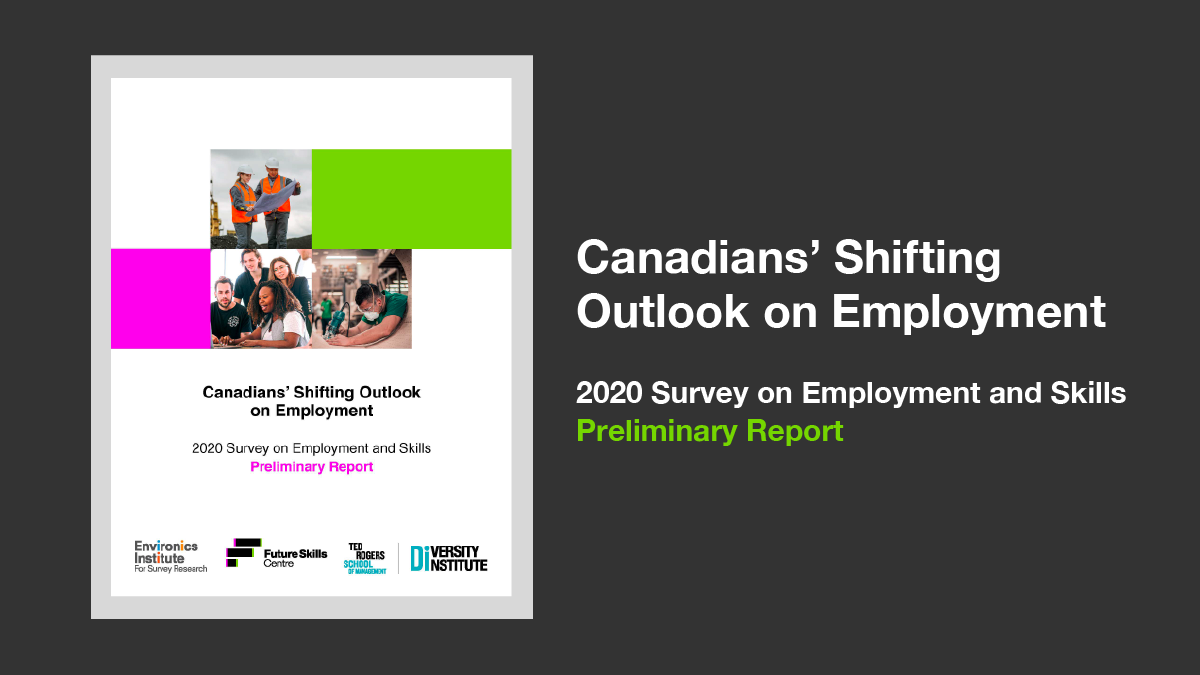 The following op-ed summarizing the initial results from the 2020 Survey on Employment and Skills was published on May 23, 2020 in the Toronto Star.  You can read it online here.

As the economy restarts, Canada needs to focus on those hardest hit by the pandemic

The COVID-19 pandemic triggered a sudden reversal of Canada’s employment picture: sliding from enjoying one of the lowest unemployment rates in decades to job loss or underemployment for millions of Canadians. But results from a large national survey show that, on the whole, Canadians did not lose confidence in themselves or in the social safety net as the pandemic took hold.

Not everyone feels as resilient, however, and as we think through a recovery, our priority should be putting in place effective supports for those facing the greatest adversity.

The Future Skills Centre’s 2020 Survey on Employment and Skills, which surveyed 5,000 Canadians in all 13 provinces and territories between late February and early April, documents the shock delivered by the pandemic. Over this period, there was a jump in the proportion of Canadians saying it was a bad time to find a job where they live, and in the proportion who were worried about themselves or a family member finding or keeping a stable, full-time job. The only province that did not record any significant change was Alberta, where the level of pessimism was already very high.

The survey also shows that, even before the impact of the pandemic was felt, many Canadians were concerned about job security or had been touched by unemployment. This is an important reminder as attention shifts to when and how to restart the economy. Without other changes, a restart will bring the country back to a point where half the labour force is worried about job security. We should aim higher than reverting to the way things were.

The survey offers reassurance. While more Canadians worried about their jobs, most did not lose hope. Before and after the pandemic arrived, Canadians remained equally likely to feel hopeful about the future and that they can bounce back quickly after hard times. They also remained equally likely to believe government support would be available if they lost their jobs — a belief that was confirmed for many in the weeks that followed through responses like the Canada Emergency Response Benefit (CERB).

Yet this confidence is not equally shared: those with more stable employment, higher levels of education and higher incomes were more likely to feel resilient. Canadians at greater risk are least likely to be facing this crisis with a sense they can access what they need to weather the storm. For those with less secure jobs, such skepticism likely reflects the reality that they often fall through holes in the social safety net’s ever widening mesh.

Governments should be commended for responding quickly to help Canadians stay afloat, and for revising programs in real time. The challenge remains getting help to those affected most — including women, racialized and Indigenous peoples, and those with disabilities — and ensuring our attention to fairness and inclusivity continues even after the emergency has passed.

The survey can help us think more deeply about what workers will need to succeed in a post-pandemic economy. We have already seen rapid changes that have decimated many companies but allowed others to expand. Shopify is now Canada’s most valuable corporation. Sometimes slow to change, universities and health-care institutions have reinvented themselves in a matter of weeks.

Are we ready for the necessary scale of change? The survey suggests Canadians are open to new information and communication technologies that facilitate new work arrangements. It also tells us that more training and supports are needed to allow them to take advantage of these technologies, especially if disruption is longer term. Only half of those in the labour force have had employer-delivered skills training over the past five years. The need for on-the-job training may now be greater than ever, yet employers’ ability to finance and deliver it may never be more challenged.

Thinking through how Canadians can best prepare for a rapidly changing labour market was a priority for the country long before any of us had heard of COVID-19. With the pandemic’s devastating effects on employment, with its disproportionate impact on those with the least secure jobs, and with the possibility that the way we do our jobs may be changed forever, the need is greater now than ever for fresh thinking about what skills and skills training Canadians will need to ensure benefits of the recovery are widely shared.